Frankly, I don;t even know for sure what the allure is about “Hello Kitty”, but these Hello Kitty costumes are sure weird.

This man looks sad, and I would look sad too, wearing this dopey costume . . .

This one is just nasty:

I like this one, there is just something about it . . .

We Art Appreciation students learns about the Edward Munch painting “The Scream”:

But the knockoff’s are funny too! 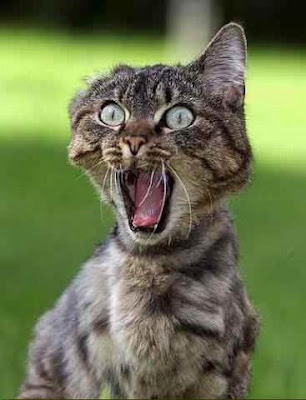 Commemorative coins are big business for small countries, and this pop-up coin from the Cook Islands makes the perfect souvenir:

They sell Easter Island coins on eBay, this one sells for $168.

This story is amazing, over 20 million dollars worth of cars found in a barn, with the doors welded shut:

The doors to the barn were welded tight, so nobody knew the contents:

Inside a GOLD Mine of vintage cars!

I want the Porsche:

In the months following December 8th 1941, over 10,000 soldiers died and over 70,000 were captured and forced into the Bataan Death March, mostly due to the colossal ineptitude of the United States worst general of all time, “Dugout Doug” MacArthur.

MacArthur was a legend in his own mind

Most of the blood falls on the hands of the dishonest coward General “dugout Doug” MacArthur, a man with such cowardice that he actually tried to absolve himself of responsibility for the December 8th 1941 disaster.

Drunkard General U.S Grant was one of the USA’s worst generals. but he pales when compared to Macarthur. Macauthur accepted a $500,000 bribe from the Philippine givernment for the purpose of trying to make America neutral in the war!

He was a notorious coward, and put his men’s lives at risk with free abandon.

It’s no wonder that his only son, Arthur MacArthur IV went homo, changed his last name, and went into hiding in Greenwich village.

MacArthur had such a titanic ego that he put himself in for the Congressional Medal of Honor for FAILING to defend the Philippines.

Who accepts a medal for heroism for orchestrating a failure that cost 10,000 lives?

He also stole an Air Medal, the Distinguished Flying Cross (which he got at age 71!), plus SEVEN unwarranted silver star medals.

Read here why MacAuthur should be stripped from his memorial and all of his stolen medals.

I think his tomb in Norfolk Virginia should be emptied and his body re-buried in Leavenworth.

I love these new rifles for firing around blind corners, killing the enemy safely:

But how do you disguise the barrel from the enemy?

The enemy just sees a kity cat, allowing the gunman to take careful aim and shoot them right between the eyes!

Check out this video on the hello kitty corner shot rifle:

Yogi Berra said it best: “Predictions are difficult, especially about the future” . . .

Since ancient times, scientists have leveraged statistically significant correlations for their predictive validity.

If Event “A” correlates event “B” with 95% predictive validity, then you can use this fact to predict events. While it might be nice to unravel the cause, it’s the science of the correlation that matters.

I have these notes on the use of statistically significant correlations and it’s predictive validity. I love the powdered white wigs from the 1700’s.

Don’t get me wrong, I like tradition, but I don’t know how they keep a straight face, wearing these dopey things: How do they do this with a straight face?

This guy looks like he has some woodland critter on his head: It’s hard to believe, but they really wear these funny wigs.

I’m sorry, but this just does not look natural:

I did not know that women solicitors and barristers are required to polp silly wigs over their coiffeurs:

Punctuation and capitalization are important, but I think that this headline could have been worded better:

I like to hire heroes, but I’m always concerned because of the huge amount of people who lie on their resumes. They lie about their experience and their education with free abandon, and I catch them all the time.

But some job applicants cross the line, lying about their military awards, claiming medals for heroism that they did not earn. I detest military posers, and I love the Stolen Valor Act that makes it a Federal offense to lie about being a hero.

You can pull a job applicants DD214 and 201 file from St. Louis, but it takes months, and then you have to fire them and report them to the FBI for arrest.

Firing a poser after you have hired them can be demoralizing to the existing employees, and embarassing and ugly to the poser.

Fake military heroes like this prick belong in prison

But it’s not only job seekers and enlisted men who embellish their heroism.

It’s not uncommon for general officers to steal medals, and Douglas MacArthur got all sorts of underserved medals for valor, including a Distinguished Flying Cross at age 71!

But there are other cases of dishonest general officers.

Boorda earned the medals legitimately, but without valor, and placing the tiny “V” nuggets on them is an important distinction:

The unearned “V” devices (on green ribbons, 3rd row down from top)

The Navy Achievement Medal is a great honor all by itself, and he earned it, but the tiny “V” nugget is important because it stands for “Valor”.

Anybody in the military instantly recognized this tiny V as recognition of an American hero. The V device is also used on the Bronse Star to indicate that it was for a heroic act:

The “V” is also attached to Navy medals, instantly marking the wearer as being a hero:

The “V” nugget is the mark of a hero.

Tragically, after being exposed by NEWSWEEK, Admiral Boorda killed himself.

This was a severe act of contrition for an Admiral, but it’s not unheared of for men of honor in the military to commit suicide.