Meet Harper Lee, the 84 year old reclusive author of “To Kill a Mockingbird”:

She never penned another novel, and most people never knew that the author of one of the bestselling books of all time was a lady and a recluse. . . .

President Bush awarded her the Presidential Medal of Freedom in 2007:

Somebody needs to talk her into writing another book . . . .

Via the J-Walk blog

While insanity might have a bearing on sentencing, this is not the first time that this jackass was caught wearing the uniform of a war hero.

Hamilton was caught red handed posing as a ful bird Colonel and again as a 3 star general, all without serving a day of prison time.

A disgrace to America, lying sack of crap

I spoke with several Marines and they were more upset that be wore a Marine uniform with heroism medals than they were upset that he was posing as a general officer.

After listening to the tape, I believe that he is suffering from senile dementia, but that should not make him innocent.

The vast majority of military posers are either criminal “con men” or they have a serious mental problem, but most vets don’t give a flying flip.

It’s their honor, and I’m hearing them say to “show no mercy”, even for a senile old man.

I spoke with a retired Navy Captain (O-6), a physician, whose comment was “hang him high”, regardless of their mental state, and many other veys who have suffered greatly share this sentiment.

Personally, I’ll like to see the NC judge grow a set and start dishing out some serious jail time, which can then be partially suspended, in return for service at a VA hospital.

Michael Hamilton wanted attention, let’s have the vets give him some! He should be forced to work every weekend at a VA hospital empting bedpans while wear a sign saying

“I posed as a 3-star General, Silver Star and Purple Heart winner”

Hundreds of good men died for these awards, and it’s about time that America cracked-down of these dirtbags who disgrace our real heroes.

This nonsense of calling soccer “football” is ridiculous!

To say that these retards in this silly kicking game are playing “football” is somehow offensive to real football players . . .

Oh dear, this fellow nearly got a boo-boo: 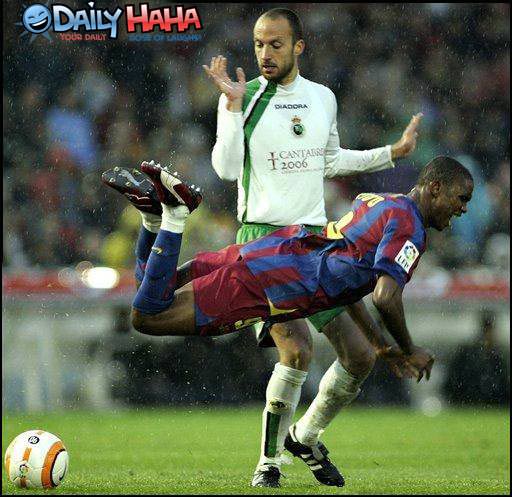 I dunno, there should be a law against calling these people “football players”, it’s way too European . . .

Now this is a football player:

This page has a great collection of suicidal animals who are only too happy to slice themselves alive for your dining pleasure:

I like this little piggy, disemboweling himself for us!

Of course, this is how Col. Sanders really makes his KFC:

I just had to include this one:

Ever since a Mayorial aide was wrongfully forced to resign for using the word “Niggardly” in a budget meeting, things have changed.
American have to be very careful not to use words that might be misunderstood as racist epaulets by the loud-mouthed idiots of the American illiterati.
“Last week David Howard, an aide to the Mayor of Washington, resigned after a staff meeting in which he called his budget ”niggardly.”
A colleague thought he had used a racial epithet, though in fact ”niggard” is a Middle English word meaning ”miser.”

Res ipsa loquitur
Holy Black Holes, Batman
The latest nonsense from the American illiterati comes from the NAACP, whose geniuses found a reference to a “black hole” to be offensive in a Hallmark science-oriented greeting card!
There should be a law against illiterate people complaining about concepts that they don’t understand.
This video speaks for itself, just listen to the appalling ignorance of the people in this video:

Sadly, the NAACP was successful in having the card recalled by Hallmark, and they are no-doubt complaining to astrophysicists worldwide to remove the racist phrase “black hole” to something more politically correct.

It’s clear that a competent engineer built this this fetching toy.

It’s not easy to detect when Fido has placed the ball properly!

To convert dogs years to human years you must remember two factors:

Dogs mature rapidly – The age comparison between dog’s years and human years is not linear. Dogs are mature at age two, while human enter adulthood at 14 years old.

I was in Barcelona recently and saw this great idea, pizza in a cone!

The Japanese do it too, pizza cones:

They have mass produced pizza cones, not as appetizing as fresh: