I’m not a numerologist, but some things just “creep me out”, like related facts that have a probability of being “accidental” at more than one in a billion. Is it the hand of God, or just people struggling to explain things? There are some fascinating web sires devoted to amazing coincidences.

But we don’t have to look far to find more amazing coincidences. . . .

Also, did you know that the only two presidents who signed the Declaration of Independence both died on the 4th of July, exactly 50 years after signing date: 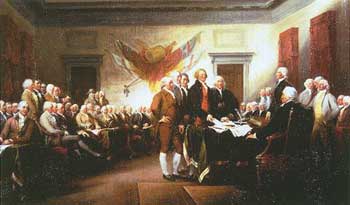 Abe Lincoln’s son, Robert Todd Lincoln, was not only present at his father’s assignation, but he also witnessed the assignations of two other U.S. Presidents, Garfield and McKinley: I’ll bet that ole R.T Lincoln did not get invited to the While House to much after that. . .

Of course, we are all familiar with the almost unbelievable relationships of Presidents “Lincoln” and “Kennedy”, almost too creepy to be just common coincidences:

The names Lincoln and Kennedy each contain seven letters.

Both were particularly concerned with civil rights.

Both wives lost their children while living in the White House.

Both Presidents were shot on a Friday.

Both were shot in the head.

Both were assassinated by Southerners.

Both were succeeded by Southerners.

Both successors were named Johnson.

Both assassins were known by their three names.

Both names are comprised of fifteen letters

Booth and Oswald were assassinated before their trials.

Creepy, huh? Or is it just a remarkable coincidence?

I’ve always wondered if it is just humans trying to make sense of the unexplained, searching in-vain for meaning where there is none, or whether it’s the hand of an unseen force, gently remaining us that there is indeed a universal power ruling our universe.