And watch out that you don’t do too much partying . . .

You can get embarrassed if you get too drunk: 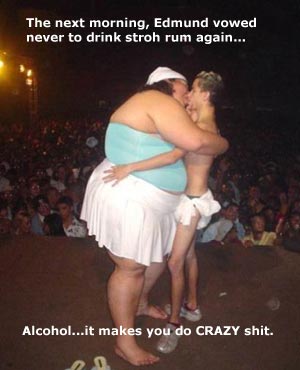 Well, “Don’t ask don’t tell” has been repealed, and the U. S. armed forces will now start taking all comers (pun intended). 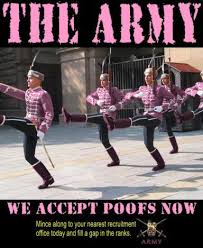 It’s inevitable that there will soon be specialized recruiting for gays and lesbian soldiers and sailors.

They may even form all-gay units, imagine the possibilities:

It’s well known that the British have accepted fairy nice soldiers in their military for centuries:

I’ve been told by several Marines that despite the new rules, Marines may not tolerate fairies among the ranks of few and the proud.

All branches of the military have different uniforms based on sex:

The military has always had separate uniforms based on sex

Hence, I expect that there will be “fabulous” gay uniforms.

The armed forces have targeted recruiting ads toward women for decades:

So it’s no stretch that they will now target gay and lesbian recruits.

The Navy has always been popular for gay people, it’s like a singles cruise . . .

Here is a concept recruiting poster the new gay Navy:

Wikipedia is the world’s largest published of anonymous garbage:

I wad thrilled to hear that nobody is supporting them anymore and that they need money to continue their mission of distributing misinformation!

They do America a huge dis-service with their liberal bias and inaccurate facts, truly a dictatorship of idiots: I like this line by Homer Simpson to Lisa:

“Don’t worry about Wilkipedia dear. We’ll change it when we get home“

It’s time to ban wikipedia, and it has nothing to do with free speech.

ANYBODY can introduce their personal bias into Wikipedia, and do it anonymously:

Let’s hope that Wikipedia folds soon and America starts getting non-anonymous credible infornation from the web.

I don’t understand the Gaddamn liberal hippies that run the TV networks.

This week we see Lindsay Lohan getting her skanky face all over the news because the drunken slut went to jail for her whore-ish escapades.

Why the hell should we care about a nasty drug addict?

Why don’t we see anything about these brave men who died this year to protect us from the filthy terrorists?

These are the folks who belong on TV, real American heroes:

How about we see some real TV news about these Marines that gave their lives for YOU just last this week?

Any moron with a good scope and a modern high–powered rifle can easily go big game hunting and kill at 300 yards.

For example, look at that silly bimbo Sarah Palin on her stupid TV show while “hunting” a caribou!

This dumb bimbo should not be proud of this easy kill

My grandma could have shot that caribou; all Sarah did was lay down and squeeze the trigger.

Uncle Remus used to talk about “old man hunter from Huntsville”, and a real sportsman will use a bow and arrow or a big game pistol.

I prefer up-and close hunting where you have to get within a few hundred years, and it’s way more fun to hunt predator than a prey animal.

Even though predators don’t taste good, predators might hunt you back, making it lots more fun:

– Lions and Tiger and Bears: Oh My!

– Somali Pirates: I like this idea, the Somalia Pirate hunting cruise

To make it “fair” I recommend big game hunting with a handgun to kill a Grizzly bear . . .

Big game hunting with a handgun

Big game hunting with a pistol is not a new idea. Here is my 150 year cap lock rifle that some redneck chopped down and converted into a 50 caliber pistol!

A big game pistol made from a rifle
(From the private collection of Donald K. Burleson)

Here is my big game pistol, a Thompson 30/30 that packs a whallop:

When you have to carry a hunting rifles over great distances, it’s easier to slip the pistol under your belt, but beware, the cold steel will tickle your nads:

Gun accuracy is not always about the length of the barrel. Packing a pistol makes sense of you are tracking a mountain lion over hill and dale for 15 miles, with a pistol that has far less weight and just as deadly.

For example, I did a ballistic test on my trusty Marlin 30/30 lever action game rifle, weighing about 8 pounds with my Thompson pistol:

But man oh man, does the Thompson pack a monster kick! The muzzle flash alone is awesome, and my hands ached after shooting only 10 rounds in this monster.

The Thompson centerfire in high caliber has the greatest recoil of any gun in the world!

Watch this fellow shoot a 60 caliber Thompson Contender, the most powerful handgun in the world. It’s hilarious!

But recoil aside, you cannot deny that the Thompson centerfire is among the most accurate pistols in the whole world.

Check out this Thompson center pistol hitting balloon at 300 yards:

Remember to be good, you still have one day left!

With the coal shortages, bad kids don’t always get a lump of coal anymore.

When Santa Claus runs out of coal, he gets creative:

When Santa runs out of coal

The TV show “Cops” had a great Christmas show titled “Ho Ho Ho!”, but it’s not what you think.

The “Ho Ho Ho’ show is not about Santa Claus, it’s about Hoes!

“Cops” is reality TV at it’s scummiest, watch as they pick-up hookers and cross-dressing prostitutes. Check this out, entertaining and scary:

The worst part was one whore you had AIDS and was still plying his wares in Las Vegas!

Seriously, he was KILLING people by having sex with people, and the police could not arrest him.

Watch for an Adams Apple!

These cross dressing men are very convincing, and every “John” should watch-out for any hooker with an Adams Apple:

This guy is scary looking!

Male whores decieve men, at least until they disrobe!

COPS is not for everyone, but it’s fun sometimes, to watch losers and feel superior:

“Floggings carried out under Islamic law are almost a daily punishment in Sudan for crimes ranging from drinking alcohol to adultery. But vague laws on women’s dress and behavior are implemented inconsistently.”

I worry that racist attacks are on the rise in America. . .

– Brutal Beating: Just before Thanksgiving our son was robbed and beaten by three men who ambushed him from behind some bushes while he was walking home from school at East Carolina University. They grabbed him from behind and tried to strangle him . . .

– Racist taunts: I have been the victim of racist attacks right here in North Carolina. In just the last six months Janet and I have been publicly derided as “whitey” and “cracker” by racist people. . .

Check out this scary video, a pregnant woman robbed and attacked on a bus by hoodlum teen girls:

There is a lot of racism lately, and not all racists are white people: 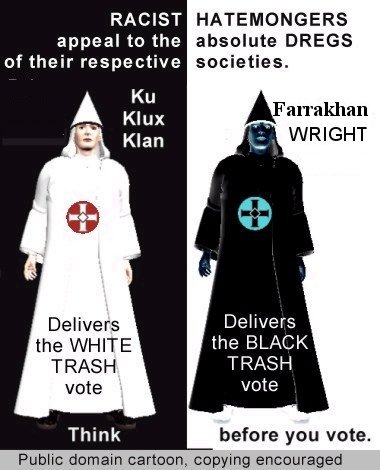 I’m proud that both of my kids in are following in my footsteps and becoming MBA’s.

Being a Dad distorts your perception. Even after they finish their MBA’s and become the aggressive attack dogs of the business world, I will always remember them like this:

Becoming an MBA is a transformative experience; it defines you.

You have survived one of the most rigorous graduate programs in the world and you become an intelligent a hard charging executive with the skills to make important business decisions.

I’ve always made them pursue activities that will bolster their self-confidence. You cannot survive MBA school if you are a wuss:

Self confidence is required to be an MBA

Last Friday, on the 17th of December, 2010, Andy finally got “hooded” as a Master of Business Administration!

Andy graduated from East Carolina University College of Business, an AACSB school that is consistently rated as one of America’s top Business schools. Getting an MBA is a major life-changing experience, the MBA program is defined by it’s hard character:

– Hard Entry: You need a great undergraduate PGA and a good GMAT score to get into a competitive AACSB MBA school.

– Hard program: The classes beat you up! When I was adjunct faculty at the University of New Mexico College of Business, I felt bad for abusing them but I told them that “They did it to me, and I’m fixing to do it to you”.

– Hard Skills: An MBA is a thinking machine who knows every nook and cranny of the business world. Just ask Andy, he knows EVERYTHING. . . .

You know, Andy is already taller than I was at his age:

I ensured that both my kids learned the value of hard work and the courage to take calculated risks. They are both proficient skiers, certified scuba divers:

I even made them try skydiving, to get the confidence to make life-or-death decisions:

Staring at the first grade, Andy has completed 16 years of schooling, and he only has three more years to go!

Only has six more semester of school (Law school) and Abdy will be ready to enter the world of work, holding the ultimate über degree, the JD/MBA.

See all the photos of the Masterdization of Andrew Burleson