I wish I had thought of this, fake peel and win stickers! They even come with “no winners” that you can stick on your own drink to make it look legitimate!

I don’t eat in fast foodery’s, but this could still be great fun!

I used to collect pennies, and somewhere I have the old large cent penny from the early 1800’s:

After a half century, the first change since the “wheat penny” went away with the new “Union Shield” penny for 2010:

This article notes that a British job ad for somebody who is “reliable and hard-working”, since it is offensive to unreliable British people:

“Devonwood Recruitment boss Nicole Mamo said the Jobcentre Plus in Thetford, Norfolk, told her such an advert could be “offensive” to unreliable people.” This is so wrong:

I never thought that they could beat upside-down dogs, but here we go!

Check out Upside down celebrities, quite funny!

My nephew was born with a serious medical condition and even though his parents were fully covered with excellent health insurance, they were told that his life-saving operations were not covered by health insurance because it was a pre-existing condition!

Because his parents were not low life and they worked hard for their money, my nephew could not get the free Medicaid giveaway and his family had to sell their home and move into a trailer for many years to pay off this bill!

Of course, poor folks only get the best of care, and we even pay for willful misconduct:

Willful Misconduct should not be a disability!

Evidently, nothing has changed as this article notes parents whose newborn was denied medical coverage for in utero pre existing conditions!

I have mixed feeling on this issue. On one hand, taxpayers should not have to pay for a heart transplant for a 40 years morbidly obese smoker who mooches off of disability because he ate himself into a wheelchair.

In countries with socialized medicine like the UK they let alcoholics die if a transplant is not a good value for the money (e.g. a history of relapse).

British alcoholic dies rather than get free liver transplant

It’s cold, but these are the practical medical decisions that doctorss truggle with everyday, determining who is “worthy” of expensive medical procedures . . .

History gets warped over time, as this clever video illustrates!

Beatles documentary from the year 3000

“No person who is diseased, maimed, mutilated or in any way deformed so as to be an unsightly or disgusting object or improper person to be allowed in or on the public ways or other public places in this city, or shall therein or thereon expose himself to public view, under a penalty of not less than one dollar nor more than fifty dollars for each offense.” While I find this horrible when applied to the disabled, the willfully ugly are a different story.

Dirty hippies, Europeans with British teeth and anybody with excessive body odor should be outlawed as “willfully ugly”:

Hippies should still be covered by ugly laws

It should also be illegal to look like a French person in public: 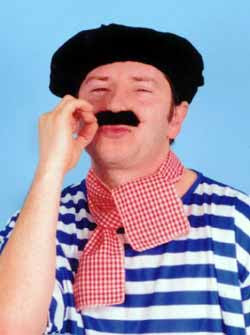 So ugly that it should be illegal

The spoken English of the Caribbean people is influenced by the Jamaican, Bahamian, Haitian and Dominican dialects, and many of the locals speak a Creole English with distinct Dominican and French influences.

Caribbean creole is clearly a different language to itself!

Who Diss or Who Dat?

I was in an office building in the Caribbean and I heard someone ask over the phone “Hoo Diss”?

Caribbean Creole is often heavy contractions. For example, when they answer the telephone they say “Hoo diss?”

Axing “Hoo Diss?” is a contraction for “To whom am I speaking please?”

We also see the variation of “Hoo dat?”

In the Bahamas, Turks and Caicos Islands they have a special English Creole. It’s all English, but it’s been changed so much that it’s not recognizable as English at all!

For example, on South Caicos Island, many of the islanders pronounce the “v” sound with a “w” as in:

Other unique Turks and Caicos Islands Creole words include:

I’ve been watching the amazing HBO mini-series “The Pacific” and I was reminded that there is a zillion dollars worth of cool stuff waiting to be salvaged from the jungles.

Before my father died he told me about treasure at was buried in Luzon and he also told me where some perfectly good vintage WWII bombers and fighters were ditched in the jungles of New Guinea, New Britain and the Solomon Islands.

The Japanese were a formidable enemy, and we lost a bunch of planes:

Back then you could buy a B-17 for less than 10 million dollars, but today you cannot get a B-17 at any price. The triangle between Mareeba airfield in Queensland Australia, Rabaul Harbor and Guadalcanal is littered with hundreds of WWII aircraft, some worth millions of dollars!

You have to admit, the B-17 is the most beautiful aircraft ever built:

My Dad, Louis Burleson was in the 30th squadron of the 19th bomb group which lost many planes, some which had to be ditched while still in great condition!

The Japanese ever flew some of them! A B-17 captured by the Japanese

There is gold in them thar hills!

Those downed aircraft in the salt water are ruined, but those that crashed in arid regions are still intact, a real gold mine!

Salvaging the B17 “Swamp Ghost” from the jungle

It took a team months to haul her out, and it probably cost a small fortune, but this aircraft is a national treasure.

They have tried hard to account for all of the B-17’s but they missed a few, and I know where they are!

If you know where to look you can even see pieces from Google earth . . .

I finally found the 30th squadron patch from the 19th bomb group. It looks funky like something from the 1960’s:

The 30th squadron patch from the 19th bomb group (heavy)

I think it may be time to see if I have what it takes to salvage some of these historical treasures.