America’s first year of WWII was a disaster. The Navy was devastated by the cowardly attack at Pearl Harbor, the Army soldiers were murdered by the hundreds in the Brutal Bataan death march, and the Army Air Corp was chased by the Japanese from the Philippines all the way into Australia.

America needed some victory, but we were outnumbered and out-gunned by a brutal enemy whose cruelty knew no bounds.

The tide began to turn after innovative thinkers began to dream-up new ways to kill the Japanese scourge, using existing tools in new ways, thinking outside the box and trying new things.

Jimmy Doolittle’s bold raid on Tokyo was nothing short of revolutionary, launching a large twin engine bomber off of an aircraft carrier, something for which it was not designed to do.

You can’t do that! It was not designed for that purpose!

The Dolittle raid also an act of incredible bravery, a one-way trip to China, and a good chance of being beheaded by the douchebag Japanese if they were captured.

This picture below was a wake-up call for America, exposing a cruel and amoral enemy. This is a real picture, a reminder of what might happen to American airmen if they were captured:

It’s sad that kids today have never heard of Jimmy Doolittle, an real American hero whose innovative thinking and bravado helped turn the tide, inspiring a new generation of Americans to destroy the Japanese aggressors . . .

But there were small victories too, like a small group of young airmen in the 19th Bomb Group who broke the rules, using guts and innovation to sink a large Japanese cargo ship, against overwhelming odds.

Read this great story about about using a B-17 in ways that it was not designed to fly. This was one of my father’s favorites stories, his lesson on how to be successful by girding your loins and being brave enough to discover novel ways to use existing tools!

You can’t do that! It’s not designed to work that way!

The pilot, Bernie (Ben) Schriever, was an amazing fellow, standing 6 foot 4 four inches tall. Before he became a war hero, teenaged Schriever was a sub-par golfer who could drive a golf ball 300 yards! He appeared in “Ripley’s Believe It or Not” when he shot three consecutive eagle deuces!

Anyway, Schriever went on to become a famous 4-star general and my father got his first Distinguished Flying Cross for helping on this mission. It takes brass balls to use a B-17 as a dive bomber!

Schriever’s dive bombing a B17 was just the beginning. His innovations lived on as he implemented Mutually Assured Destruction (MAD), the technology that kept America from being attacked by the Godless Commies.

There is a new 2009 book about Bernie Schriever titled A Fiery Peace in a Cold War: Bernard Schriever and the Ultimate Weapon, highly recommended . . . 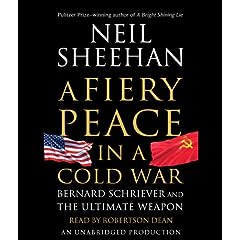 The innovation of American airmen is just one example of how thinking outside the box makes America great.

I learned this lesson well, and my success today is due in no small part to understanding that a little courage and innovation goes a long way to making you succeed.

To this day, I explore novel uses for computer software, using tools in ways that they were not designed!

I chuckle when I hear foreigners criticize and mock me for my novel techniques, saying the same old crap what we heard from the Luddites in WWII:

“You can’t do that! It’s not designed to work that way!”