It’s weird how people will see “naughty bits” in common fruits and vegtables: 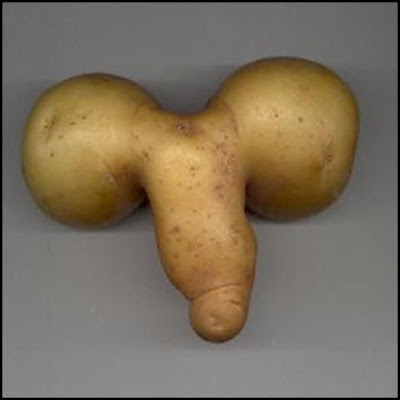 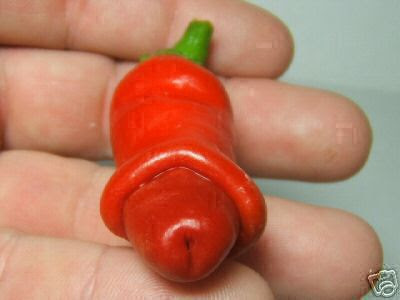 These must be the European variety, these are too small for Americans . . . 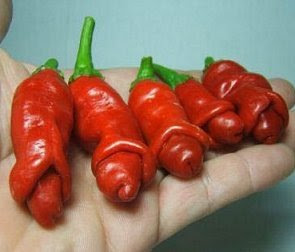 For years, people have tried to devise a simple wheel device to transport people.

In WWI, they envisioned a large single wheel vehicle that would serve as a tank:

And in recent times, many have tried to make a drivable wheel:

And this one from South Park:

The “IT” from South Park

But here is a real working prototype drivable wheel vehicle named the dynosphere from the 1930’s:

This article notes that you must be very careful with burglars attacking your guard dogs.

I detest animal abuse, and this poor guard dog received a serious injury by some scumbag intruder who inflicted a nasty gash above this dog’s eye:

Guard dogs can be abused when confronting intruders

Eventually they did find the person who abused this guard dog, dead as a doornail:

In this case the abuser escaped a criminal conviction, but at least the poor dog got some satisfaction, as it appears that his entire face was eaten. . . .

As Dan and Cuddles approach being the world’s longest active guide animal team, we are preparing some new guide horse candidate for training against our backlog of blind applicants.

Dan is scary looking biker guy, so we named his guide horse “Cuddles”

Large noisy crowds are a great way to train guide horses to make them oblivious to distractions, so Jael and Jen3 took to the NC state Fair with their student guide horses:

Jael and Jen3 take to the streets with their students

One command they must learn is how to “go” on command, even in a crowd (without “stage fright”). Of course, we must not use common phrases for such activities, and his command to take a dump is “bombs away”.

Guide horses are taught to relieve themselves on command

The fair is great fun, and here we are at the hay competition, and it’s no surprise that NC farmers produce some of the best grass anywhere:

At the State Fair hay competition

But the fair is more than exhibits, it’s a chance to eat some incredible gut-bombs that are found nowhere else on the globe!

Eating crap at the state fair

Some of the crap at the state fair is just plain nasty, but you have to at least try it.

All you need is a deep fryer and some imagination. . . .

I thought it was gross, but Pal liked it and helped Jael finish it off:

And this concoction is different, stuffed corn dogs:

But the big hit this year is chocolate-covered bacon, delish:

Called “pig lickers”, the chocolate-covered bacon was a great hit, salty and chewy chocolate, with a smoky aftertaste:

And of course, no trip to the fair is complete without some deep fried butter!

See more on our training mission to the NC state fair.

This article allegess that all US presidents (except Martin Van Buren) share common ancestry with John “Lackland” Plantagenet, King of England at the beginning of the 13th century.

Of course, this is all based on the assumption that when we go back far enough to have millions of ancestors, there is bound to be a common ancestor.

Only rarely do we see these alleged “relationships” properly proven. For example, genealogists have proven that Sara Belcher was a common ancestor of FDR, Winston Churchill and Doug Macarthur.

As a genealogist, I find this nonsense about a recent common ancestor to be idiotic, but it brings up a good point about the assertion that large populations of people may share ancestry with famous people who procreated frequently.

The numerical puzzle of ancestry

It’s the same 2**n (powers of two) equation used with binary computing, and it has some important ramifications because it does not take long to generate more ancestors than the world population.

From this mathematical certainty, can we conclude that sharing of the gene pool (marrying cousins) was necessary to explain the over-lap in family trees?

For populations living in isolation (i.e. Madagascar circa 800 A.D., Colonial America), this is even more pronounced, and everyone, by mathematical certainty, was sharing common ancestors. Before the great immigrations (China, Ireland) during the 1800’s, almost all multi-generation Americans were cousins by virtue of sharing a common great-great-great grandparent.

So, how to we resolve the numerical certainty that 40 generations ago, we must have descended from a trillion ancestors? Some use the concept pedigree collapse to explain this problem.

The term “pedigree collapse” is a polite word for marrying your cousin, and they show that isolated island populations have a high rate of pedigree collapse because of the lack of un-related partners.

In this case, marrying a 10th cousin would eliminate a large chunk of common ancestors, starting only 10 generation before when the common ancestor appears.

This article has a great discussion of this issue, and this paper from Yale claims to have developed a mathematical model to explain why we must, by certainty, share ancestry with everyone else:

In animal husbandry, breeding of cousins is an acceptable practice, and it can greatly help increase desirable traits, even though it dramatically narrows the total number f distinct ancestors.

For example, consider the pedigree of one of our champion stallions, Tha Dude.

Also notice that the equally famous stallion *Bask++ appears several times in his ancestry, appearing as both his grandfather and as Dude’s great grandfather.

In this case, the line breeding was a smashing success, since Dude is almost a carbon copy of Khemosabi, inheriting both his stamina and stunning looks. These are the lines that are commanding millions of dollars, as with this *Bask++ line horse that sold for $2.8m . . .

But it was not just black people, we also saw Jose Jimenez, the Frito Bandito, Speedy Gonzales and Bill Richardson, all presented to mock Hispanic people.

With only five more space shuttle missions, the time is growing short if you want to see one of the “monster rockets” blast into outer space.

We chose to go watch STS-129, the launch of the space shuttle Atlantis.We won’t see giant rockets again until 2030 when the Mars missions begin, so many folks but viewing a shuttle launch on their bucket lists.

Fun for the whole family

NASA has a great gift shop with all sorts of STS-129 goodies, hats, mission patches, you name it, and at fair prices (a STS-129 cap was only $13). It’s not all just junk either. They had an Apollo 11 mission plaque signed by all crew members for only $20,000. This is not a bad deal, since Neil Armstrong rarely gives autographs.

The ground have plenty to keep you occupied until the launch, including a full-sized space shuttle, and a space shuttle flight simulator.

They have a space shuttle simulator, and I found interesting that the code displayed on the launch screens is COBOL source code!

The launch itself is indescribable, the ground shakes and you can feel the heat from the rockets.

The kids like to use the word “awesome”, but this event is truly awe inspiring.

Here are my full notes on viewing a space shuttle launch.

We have a huge problem with wild critters and the ranch is crawling with furry varmints of every type:

But the worst are the raccoons, and they are insanely difficult to trap alive. Hardly a week goes by that Jen3 does not have to bury a raccoon road pizza:

I used a Have-a-Hart trap baited with a fresh egg, and night after night, old Mr. Coon managed to get the egg out without springing the device.

I finally did trap the smelly beast and relocated him far out in the woods, where he could steal our eggs no more.

Raccoons are also problematic because they have no fear of dogs, and the dogs hate them with a passion:

Racoons have no fear of dogs

But how smart are the coons? I found this golf ball, out in the word, about a quarter mile from my golf area:

As we can see, old Mr. Coon mistook the ball for an egg treat and scurried off into the words with his prize. He did not give-up too easily either, and judging by the teeth marks, he spent quite awhile trying to crack-open this strange new egg.

It’s interesting that the recoon appears to have an instinctual desire to covet round white objects, hardwired perhaps . . .