When marketing genius Ron Popiel started Ronco, it was based on the premise of “need creation” where customer have the epiphany “I need one of these”. 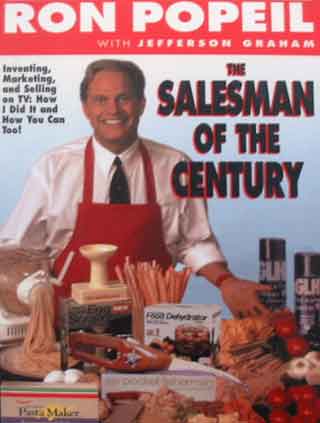 Remember the Veg-o-matic “it slices, it dices”?

Sony does the same thing, but “need creation” is not a new concept.

Back in the early 1900’s they said that a good marketer could sell refrigerators to Eskimos. Well, it’s true. Here is a picture I snapped in an Inuit village in Greenland, refrigerators and freezers sold in a store sitting on top of the permafrost!

Iceboxes for sale to Eskimos

I was recently in Denmark where I found this product that Americans don’t know they need.

Incidentally, Denmark has one of the strongest currencies in the world, and compared with the weak dollar, American services are a huge bargain in a land where a big Mac costs over $10 (see my notes on the Big Mac Index and the PPP):

I was in Copenhagen recently because of new demand which is created because of exchange rate inequities. Database management was invented in the USA and since it’s an American specialty, and the Danish are thrilled to be able to get All-American remote database support for less than half the cost of local talent, a win-win for all!

Anyway, Ron Popeil missed this gem. In a Danish store I came across this beauty, a “Nasal horn”!

I’ve always wanted to squirt water from my nostrils

Ever since Thomas Crapper invented the toilet, flushers have come in a bewildering array of forms. They can be pull chains, foot petals, or any number of weird buttons. Thomas Crapper – Inventor of “The Crapper”

I like frugal people, and I have noticed that people in Europe will always turn a nickel over twice. The thriftiness of the Scotch and Dutch is legendary (e.g. the “Dutch Treat), and I noted that their toilets have two buttons, with the intent of saving a few micro-pennies per flush.

If European, you press the light flush button. Anything weighing more than five Courics (1) requires the “heavy flush” button.

An Amsterdam Crapper with stingy and liberal flush

A Denmarkian crapper with dual flush

I hate Chihuahua dogs! Every now and then we have a “take your dog to work” day and we used to have an employee who would bring-in this nasty flea-bitten Chihuahua.

Sure, they are cute in a Taco Bell sort of way, but don’t ever let them get anywhere near your face. This nasty pooch climbed up on the back of the couch, and started messing with my hair, scenting it with her foul odor.

When I turned to grab her and toss her across the room, the disgusting beast lunged at me and flicked her tongue into my mouth!

Super fast, like a Ninja, I never stood a chance.

Words cannot describe being frenched by a Mexican dog. I was like having a piece of hot, wet, stinking liver in your mouth.

It was beyond gross. I brushed my teeth until they bled and I’ll probably never get over it.

In other news, I made LOLCats, quite an honor!

Check out this Businessweek article on quants. Being a quantoid is now cool, and they are called the “Numerati”! Jen just got her degree in Operations Research and Supply Chain Management, and I’m really glad to see that predictive modeling is alive and well . . .

The Rise of the Numerati

Take the time to read all four pages, this is important new research. Some hippies and liberals scream “Big Brother”, but personnel can be seen as a “system”, just like any business process.

Personally, I have developed amazing predictive models for predicting the future behavior of computer systems, and it’s great to hear that these heuristic science techniques are going mainstream. This is exciting stuff, real science applied to the real world:

The algorithm can be the foundation for a whole business. Just like Dayjets and Federal Express, efficient application of algorithms, combined with artificial intelligence can revolutionize businesses. The new class of super-scientists, the Numerati stands ready to redefine empirical science.

But sometimes algorithms are funny! I develop computer system that pass information inside the URL and we commonly use algorithms to create them. Just like monkeys will eventually type Shakespeare, sometime you get a funny URL. Check out the last string on this Amazon URL: