The losses from “Internet Indigents” may be heralding the demise of web advertising, a multi-billion dollar a year industry.

Now that the poor and ignorant have access to the Internet, all of the major search engine companies are feeling the heat.

Click fraud, scams and adwords deception have become the norm, and anyone who is considering advertising with paid clicks needs to know that the Internet Indigents will eat-up more than half of their advertising budget.

Consultants who study online advertising estimate that 10% to 15% of ad clicks are fake (deliberate click fraud), running up a tab of over $1 billion each year. However, when you consider the Internet Indigent, idiots mashing hyperlinks for fun and profit, the real figure is closer to five billion dollars a year.

At long last, we are seeing the market voting “No Confidence” in paid ad clicks.

Google stock fell 4.7%, amid concerns over the future viability of paid adwords hits the market and I believe that’s it’s largely due to the nasty “Internet Indigents”, poor, ignorant web surfers who clog forums with idiotic questions, stalk and harass people, and make themselves feel powerful by clicking paid adwords to cheat their business competitors. Businessweek confirms my own statistics that the vast majority of the “Internet Indigent” are foreigners, often uneducated and poor, but they all share low moral values and greed to rip-off businesses with fake ad clicks:

“Over the past three years, he has noticed a growing number of puzzling clicks coming from such places as Botswana, Mongolia, and Syria.”

Wired notes that the click fraud is big business, and much of the stealing has been automated with foreign botnets:

“The FBI recently reported that botnets – which are used to facilitate crimes, such as spam, identity theft, denial of service attacks, phishing, spyware distribution and now click fraud – have infiltrated more than 1 million U.S. computers”.

Internet indigents are the scourge of the web, one of the primary reasons that the web is becoming a dictatorship of idiots. Today, any jackass can label themselves an “expert”, regardless of their qualifications. In the database arena, I’ve seen loads of “fake” experts, people who put-up a front as an expert, yet refuse to publish their resume, lest people know that they are not what they appear to be.

Rednecks should be prohibited from clicking on paid advertizing

In fact, the whole pay-per-click auction model that Google pioneered is fraught with flaws. This study by ComScore notes that the types of people who click on ads are not the kind of people with the disposable income to buy your products and services. Over half of an online advertising campaign being spent on “Internet Indigents”, lower-class, blue collar surfers who earn less than $40k/year, and click like mad on paid ad clicks:

“The study illustrates that heavy clickers represent just 6% of the online population yet account for 50% of all display ad clicks. While many online media companies use click-through rate as an ad negotiation currency, the study shows that heavy clickers are not representative of the general public.

In fact, heavy clickers skew towards Internet users between the ages of 25-44 and households with an income under $40,000. Heavy clickers behave very differently online than the typical Internet user, and while they spend four times more time online than non-clickers, their spending does not proportionately reflect this very heavy Internet usage”

Even the all powerful Google has not developed the technology to thwart the Internet Indigent, and they steal advertising dollars with free abandon.

“It’s not that much different from someone coming up and taking money out of your wallet,” says David Struck. He and his wife, Renee, both 35, say they dabbled in click fraud last year, making more than $5,000 in four months.

Employing a common scheme, the McGregor (Minn.) couple set up dummy Web sites filled with nothing but recycled Google and Yahoo advertisements. Then they paid others small amounts to visit the sites, where it was understood they would click away on the ads, says David Struck. It was “way too easy,” he adds.”

There are also cases of unscrupulous and struggling competitors who use paid adwords to try to siphon-off legitimate searches for their competition. See here, when you search for the keyword “Burleson”:

One promising tool is the Google adwords by zip code, where you can target your ads to neighborhoods with less poor and immoral people.

Another possibility is a tool to detect when an internet indigent is behind the keyboard, perhaps a body odor meter attached to the PC:

It’s time to start thinking green, as our huge pickup trucks now cost over $100 to fill-up.

“Ole Yeller” is our tried and true farm truck, a noble old lady, the ultimate sexy redneck car. I always get the pretty red neck gals giving me the eye when I drive this baby into town:

The girls just stop in their tracks and their jaw drops when they see me in Ole Yeller. You can tell that they find it very sexy. Can you believe that she still has her original paint?

Our F-350 even has two gas tanks, a true land barge, and the ultimate farm vehicle. It’s far larger than the biggest SUV:

The problem is finding an electric car that is not seen as effeminate. Remember the Isetta mini car from the 1960’s? Very queer car, opening-up in the front: The Prius, for example, has a reputation for being for gay (or at least “wussy”). In the noted South Park episode, we also see the perils of hybrid car owners being seen as “smug”, self-righteous hippie liberals who think that their own farts don’t smell bad.

Or worse yet, what if people think we are European? That would be too shameful to bear: 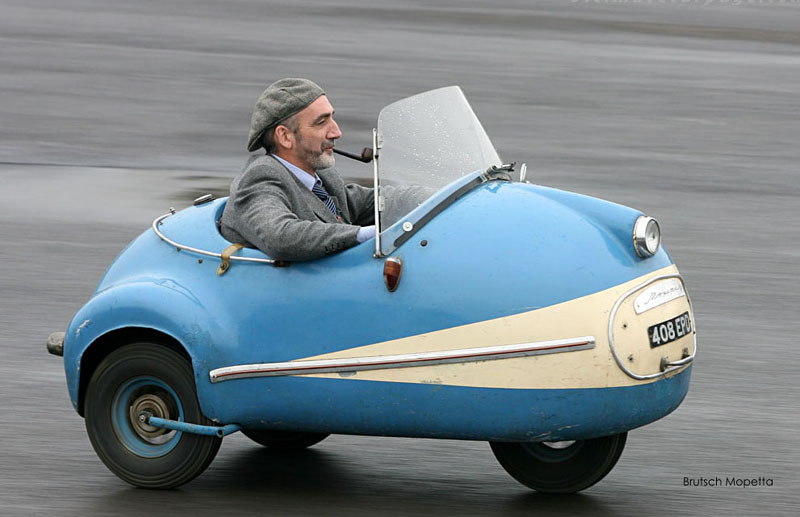 So, how do you “go green”, without being accused of being a Democrat? Me, I’ve always admired those animal-powered luxury cars, 100% green:

Our little Gem car is street legal, plus it’s also authorized for the golf course. However, there is no way I would drive this is my own neighborhood, it’s fodder for ridicule in redneck circles.

The Gem 4-seater can comfortable hold four people, with a top speed of over 40 MPH (But only if you remove the governor):

It’s also hard to cherry-out a wimpy electric car, they look dumb no matter what you do, like the Smart Car, all weird, all the time:

Even the tried-and-true Isetta looks weird when customized:

And don’t even think about getting an electric car convertible. They look like a rolling bathtub:

Well I’ll be fuddly-ucked, Sheetz is being accused of using “Fowl Language” with this frickin chicken campaign.

I hear that these were several runner-up name choices:

And a good slogan would help too, maybe like this:

“Life is a Sheetz sandwich, and every day you must take a bite”.

Here is funny Fark commentary on this fricking chicken:

And their suggested alternative name: Ah, the outrage continues. What a frickin mess:

But it’s a billiant ad campaign.

They could not buy this kind of publicity!